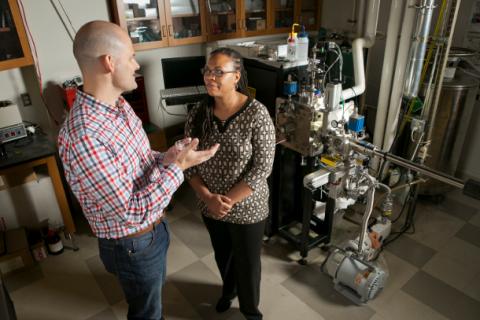 A startup company based on technology invented at Duke University is working to make blood glucose measurement as easy as exhalation—and end the need to draw blood.

The idea is the brainchild of Ryan McCormick, a recent PhD graduate from Duke’s Department of Computer and Electrical Engineering (ECE), who spent the past five years working on the underlying technology as his thesis.

Working in the laboratory of Adrienne Stiff-Roberts, an associate professor in ECE, McCormick developed an organic deposition technique called RIR-MAPLE that can produce a thin film with a rough surface that acts as a sort of Velcro for volatile organic compounds. Although his initial focus was on optoelectronic applications like organic LEDs or solar cells, McCormick quickly realized that his innovation would be well-suited for picking out organic molecules from gases.

“It’s a broad-based method that could be used in many different areas, but the first application we’ve chosen to pursue is monitoring glucose levels for people with Type 1 diabetes,” said McCormick, who came to Duke in 2009 after working for two companies—one  a small business and another a startup. “Ultimately, we’d like to expand our work to a platform technology that could be used for multiple pathologies.”